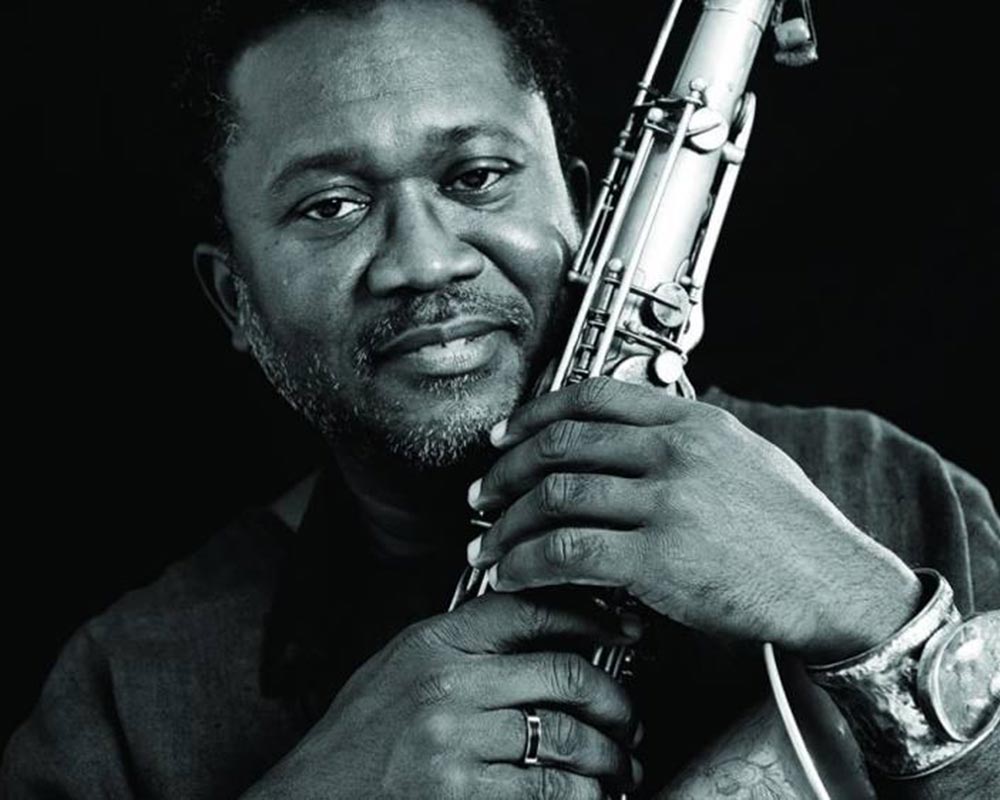 The story of jazz saxophonist-composer-scholar-activist Salim Washington paints a harlequin voyage in search of one’s roots. His parents were born and raised in the sharecropper plantations of Mississippi, met in Caperville, Tennessee, got married and moved to Detroit with hopes of a better life. His mother sewed at the Levi’s Jeans factory, and his father worked in construction and labor jobs. Although his mother prematurely passed away when he was twenty-one, Salim has careful memories of a selfless, courageous spirit who was fearless for her family. The gracious resilience of his father, who persevered to complete his education while working and raising a family, gave Salim the inspiration that he would later follow.

As the first generation in his family to be born outside of the plantations, Salim was born in the housing projects in Memphis, Tennesee. The narrative of Salim’s exposure to music is a remarkable one. When his family moved to Detroit, they lived in the notorious “Black Bottom” area during the 1960-70’s Detroit riots. As a young boy in what he calls “one of the most violent neighborhoods in Detroit”, he was drafted into the neighborhood gang at the age of 9. The leader of the gang played the trumpet and, having a soft spot for this young boy, goaded him into learning to play. Salim became very proficient, even surpassing the leader. Noticing the boy’s potential, the leader excused him from the gang.  Salim credits this gang leader to introducing him to the trumpet, his first musical instrument.

The defining moment came in the 1970s after hearing John Coltrane in Exotica (Call Sonny) and Miles and Monk at Newport; “It was the most powerful, most intelligent and beautiful thing I have ever heard. It was about me and my experience in a much more elevated form than anything I have heard…it changed everything.” This stirred him to buy a saxophone with money from odd jobs. Salim was enlightened with the intelligence in Coltrane’s music, which also triggered the passion and emotion that he gets from church music and songs like Curtis Mayfield’s Superfly. Often demoralized by teachers for his musical ideas and afflicted by racial and social discrimination in school, this was the much-needed affirmation to pursue music.

Salim first entered Harvard in 1976 and subsequently dropped out to become a jazz musician. Over the next few years, he played in many towns and cities with several bands, including a traveling Chitlin circuit group.  He also expanded into political activism, organizing protests against drug dealers in Roxbury, as well as working on support for the anti-Bakke decision and the Disinvestment movement from South Africa. He finally returned to Harvard in 1993 and completed his PhD in 2000, while still remaining active as a performer, writer, activist and family man.

For Salim, the fascination with South Africa has been longstanding. It began with Gil Scott-Heron’s hit record, Johannesburg, about the aftermath of the 1976 riots in Soweto. The struggle was led by South African teenagers, and what impressed Salim was the physical resemblance with African Americans. As he investigated further, he found similarities in their culture, as well as in their social and political histories. Later he was introduced to the music of Chris McGregor, and learned more about South African jazz musicians in exile, such as Dudu Pukwana, Mongezi Feza, Johnny Dyani and many others; “I was just flabbergasted that there was a place where people played jazz at that advanced level.” He felt a visceral connection to this place, and hoped that one day he would make his way there to be closer to his roots, culture and people.

It would take thirty-three years until Salim’s first visit to South Africa, when he was invited to teach at the University of KwaZulu-Natal (UKZN) in 2009.  After returning to New York, he spent the next few years actively performing, writing and teaching while continuing to make visits to South Africa. In 2013, he became a full-time professor in the Music Department at UKZN. “This feels like home,” he reflects, “ This is home. I am home.”

Salim continues to be a committed teacher, writer, speaker and performer in numerous solo, group and ensemble projects. He is also touring with the Eco-Music Big Band, a jazz ensemble mixing the music of Fred Ho and Cal Massey with political aspects. When he first met Fred Ho at Harvard in 1976, the two instantly became good friends, political comrades and musical collaborators. The two crossed paths again in 2000 when Fred reached out and asked Salim to join his Afro-Asian Music Ensemble. The pair would go on working together, playing and giving lectures as a scientific duo in numerous events. In 2012, they started the Scientific Soul Sessions, a collective for revolutionaries to build a soulful and scientific community. The Eco-Music Big Band is one of the many progenies from this effort of using art to inform politics and vice versa.